Syria’s revolutionary heroes of the struggle against the Ottomans and the French in the first half of the 20th century have become national symbols for Syrians. Their names are used during the current Syrian revolution against the Assad regime as symbols of national unity and struggle for freedom.

More than acts of bravery and leadership, the heroes of the past revolution were real people with families, homes, interests and quirks. I looked beyond the textbook tales to find out more about who these key figures really were. I profiled Naziq al-Abed, a revolutionist from Damascus. 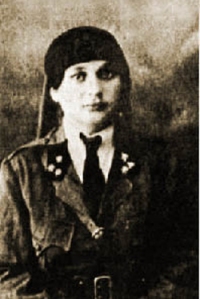 Our Joan of Arc

Naziq al-Abed was a pioneer for both national independence and women’s rights.

It might be hard to imagine Damascene women in the 1920s – generally perceived as illiterate and cloaked in traditional mlaye (a short skirt and veil) – as freedom fighters. Yet many of them took up both pens and arms in the fight against foreign rule.

Naziq al-Abed, a robust woman with a round face and dark, curious eyes, was one of the most controversial women to partake in the Syrian revolutions against the Ottomans and French. Born in 1898 as the daughter of an aristocrat and an insider in the court of Ottoman Sultan Abdulhamid II, Abed traded the French dance saloons, European tours and luxurious lifestyle that her family maintained, for the battlefield. She was also a passionate feminist, often infuriating the sensibilities of Damascus’s conservative circles.

“She was not like any of her sisters,” Burhan al-Abed, Naziq al-Abed’s third cousin, said. “She was very liberal with a strong character. She was a true rebel.”

Burhan, an anesthesiologist in his nineties, recalled with nostalgia his visits to his cousin’s farm, where he usually found her working in the field or sitting on the floor eating with her fellow workers.

“She was a humble person who loved sports and horseback riding. She used to dress like middle-class Damascenes and avoided accessories and ornaments. She was the only woman at that time who wore trousers and boots and carried a whip,” he said.

Transition to politics
Following her student years, Abed became politically engaged. Although she originally studied agriculture, she worked as a journalist and became a vocal critic of the Ottoman and French policies in her country. In 1919, she led a women’s delegation that discussed the French mandate in Syria with the American King Crane Commission that was tasked with determining the attitudes of Syrians and Palestinians towards the settlement of their territories.

Naziq held anti-colonial views despite her family’s ties to the Ottomans. She came from a prominent Damascene family whose members held important governmental positions during the Ottoman empire. Her father, for example, was the wali (governor) of Mosul and her uncle, Ahmad Izzat, was the aide-de-camp and private advisor to Sultan Abdulhamid. 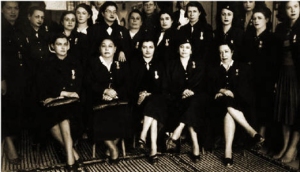 Many women activists worked with Naziq al-Abed. Together, they formed the Syrian Red Crescent in 1922.

Yet, according to Burhan, her family did not mind Naziq’s political stance, even though she was exiled as a result of it in 1914 and again in 1919.

“Even though the Abed family held important positions in the Ottoman empire, they were proud of their Arab roots,” he said.

When France assumed the mandate of Syria in 1920, Naziq was the only Syrian woman to take up arms and join Youssef al-Azmah, Syria’s then-defence minister, and the military at the Battle of Maysaloun. She is also said to be the only survivor of the battle, which ended in a catastrophic defeat and in the French occupation of Syria.

Newspapers at the time hailed her as “Joan of Arc of the Arabs” and King Faisal named her an honorary general in the Syrian army. Burhan Abed proudly recounted the king’s visit to his family house, based on the story his mother used to tell.

“We served him lemonade,” he said, leafing through a thick, leather-bound book and pointing out the common ancestors between his family and Naziq’s. 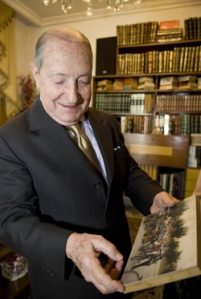 Advocate for women
Her ‘liberal’ views about women were less welcomed by her family, Burhan said. Naziq Abed removed her veil several times in public and in front of television cameras. Unlike her sisters, she was unmarried until she was in her forties and until then had lived alone in her farm in the Ghuta, a green area of Damascus fed by natural aqueducts.

“Naziq’s family were very modern and open minded compared to the mentality at that time,” Burhan said. “Even so, they did not always like her behavior. But she did not listen to them. She did what she wanted to do.”

In 1919, Naziq al-Abed established Noor al-Fayyha (Light of Damascus), the first women’s organisation in Syria. She also helped to establish many associations and organisations that advocated women’s rights in Syria and Lebanon. She financed a hospital and was the founder of the Syrian Red Star which, according to Hazim Ba’ale, director of medical services at the Syrian Red Crescent, led to the opening of a women’s branch of the international organisation in Syria in 1922.

Historical facts are based on official documents from the Historical Documents Centre in Damascus and the book Steel and Silk by political analyst Sami Moubayed.

This article was published in Syria Today magazine.