The leader of the country’s central arts venue talks about the future of the space. 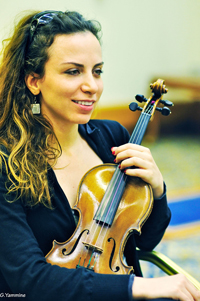 Recently, Damascus Opera House started producing its own shows and running community projects. Are you planning to move from solely being a space for arts to developing the local arts scene?

It is not really a change in our role. This has always been our aim but Damascus Opera House is still young and it is now that we have become ready to work on development projects.

We got a small grant from the Czech embassy to start an audio-visual library. We are gathering CDs and DVDs of rare music, theatre and dance performances.

The Ministry of Culture has allocated to us a car equipped with a TV filming set to be able to record our own shows. We recorded a concert by Syrian pianist Ghazwan Zerikly in which he played compositions by Franz Liszt and we will start selling copies for a reasonable price.

We’ve also produced our own shows; namely The Marriage of Figaro last season and Gianni Schicchi by Giacomo Puccini. The latter will be showing in May. We’ve also finished auditions and casting for the musical Oliver! based on the novel Oliver Twist.

There is a music project called El Sistema that Venezuela started in the 1980s to help homeless children get away from drugs, alcohol and street violence by offering them free musical instruments and tuition. Today, there are over a hundred youth orchestras in Venezuela and some of those homeless children became internationally renowned musicians. Inspired by El Sistema, I suggested that we invite Syrian orphans to perform in Oliver!. We chose 25 children from over 60 young applicants from orphanages.

Audiences are often made up primarily of intellectuals and the elite. What are you doing to expand your outreach?
We sell tickets for very reasonable prices that average Syrians can afford. Syrians can attend shows that cost hundreds of Euros abroad for very cheap prices here. Few operas around the world can boast such cheap tickets.

We are also working on raising awareness about our shows. We are planning to work together with our guest artists and organise public classes and workshops run by them for Syrian students. This way, we can raise awareness about art among everyday Syrians who are not experts in this field.

How can Damascus Opera House sustain itself financially?
We are one of the few opera houses that get governmental funds. It is a well-known fact that when a country is hit by an economic crisis, the cultural activities are always the first to suffer from a cut in the budget. The over 100-year-old Philadelphia Orchestra, for example, filed for bankruptcy protection this April. Of course, the budget allocated to Damascus Opera House cannot compare to that of other opera houses around the world, but the funds we get help us continue our work. Still, we encourage the private sector to invest. In fact, we’ve just opened the opera’s café and restaurant for investment.

How are the recent events in Syria affecting the opera house?
I believe that, under any circumstances, cultural events should continue. If we stop our cultural work, we would be taking the country backward. Therefore, the Opera House did not cancel any of its events. Those events that were cancelled were cancelled by the artists. While some were Syrian, most of the cancelled events were by foreign artists whose foreign ministries advised them to avoid travelling to Syria due to the current situation. However, our other events this month were well attended.

Will any big names perform in the opera this year?

We’ll host a Russian ballet performance on ice in December. This will be the first event of its kind in Syria. They’ll perform Swan Lake and the Nutcracker.

This article was published in Syria Today magazine.

"112, Murder at the Castle" interactive thriller play staged at the Damascus Citadel

Young Syrian actors struggling to make it in mainstream public theatres are stepping off the stage in search of alternative spaces to stage their performances.

“There aren’t enough private theatres in Syria and it’s very difficult to get into the public sector,” Osama Halal, a Damascus-based theatre director who attended a recent three-day street theatre workshop organised by the Netherlands Institute for Academic Studies in Damascus (NIASD), said. “So we had to move to the street.”

Halal and a group of fellow students from the Higher Institute of Dramatic Arts in Damascus pioneered street theatre in Syria when they formed the drama group Koon some nine years ago.

Training on the job

Street theatre brings a new set of methods and techniques to the process of staging a performance. For most Syrian actors dabbling in the art form, it’s a ‘learn as you go’ experience, because few theatre companies give young actors and directors the leeway to experiment with the genre. Workshops are, however, organised sporadically by the Higher Institute of Dramatic Arts and foreign cultural centres.

Finding appropriate rehearsal spaces and obtaining funding is another permanent struggle for young actors. While some obtain small grants from the Ministry of Culture’s Theatre Directorate, the majority seek out the support of private companies.

“I have knocked on the doors of chewing gum and soft drink companies to beg for funding,” Halal said. “So far I have managed. But each time I have a new idea for a play, I get nervous about how I will fund it.”

Syrian law, which states that a permit is needed to host a public gathering, can also act as a further obstacle to staging productions. For Halal and his friends this formed a final and unexpected hurdle to hosting their first performance. After struggling to obtain funding for the group’s premiere of Ala Tarikak, which they planned to stage near Nawfara Café in the Old City of Damascus, the group discovered they could not perform without government permission.

“Without a permit, any policeman could have arrested me,” Halal said.

Willing to run the risk, the group moved the performance to Bab Touma, another area of Damascus’s Old City, where it attracted huge crowds. “It was great – people loved the play and no one arrested us.”

After the success of their first play, the group has continued to perform in Syria and abroad. They have gained a dedicated local following, performing on roofs, in tunnels and in the streets of Damascus. In general, they obtain their permits by working with foreign cultural centres.

“If it weren’t for the cultural centres, we would never have been given permission to present our plays,” Halal said.

"112, Murder at the Castle" an interactive thriller play staged at the Damascus Citadel

The lack of structured training programmes is seeing a distinctive Syrian form of alternative theatre emerge, one rooted in the rich and complex Arabic language. Annemieke Delis, a Dutch theatre director specialising in street theatre who hosted the NIASD workshop, said the Arab world’s “huge poetry heritage” is reflected in the country’s dramatic style.

“This is reflected in Syrian theatre, where the spoken word is so important that you rarely see silent plays,” she said.

Delis recently directed “112, Murder at the Castle”, an interactive thriller staged at the Damascus Citadel, where the “Syrian theatre writers are really looking for psychology and political intrigue in their plays,” she said. “Given the political situation in the region, it makes sense that they write about big issues. The Netherlands is a wealthy country, so it’s boring to put on theatre performances there because we don’t have big subjects to write about.”

What struck Delis most during her visit to Syria was the enthusiasm displayed by local actors. “I was impressed at the motivation of Syrian actors,” she said. “They were very attentive and willing to learn all through the workshop.”

Such enthusiasm is needed to launch a successful production. “It’s very tough working in theatre in Syria,” Halal said. “I’m young now and I’m ready to fight to get my play on stage, but this determination won’t last long. When I get older I won’t have the energy to pursue my ideas and projects.”

Nevertheless, Halal is certain local street theatre will only grow in popularity. “I know that other young directors will carry on after me, so street theatre will never disappear in Syria. The question is whether it will evolve if theatre directors and actors continue to have such short careers.”

This article was published in Syria Today magazine