Syrian fashion designers are beginning to make a name for themselves in the global fashion industry, yet they continue to receive little support from local clothing manufacturers and retailers. A proposed Fashion Designers Union hopes to change that.

Syrian models hit the catwalk at Damascus’ citadel last July in a cutting edge show organised by the ESMOD Syria fashion institute. The event propelled local designers into the limelight as models flaunted avant-garde clothing ranges before the eyes of Parisian fashion critics. Yet while Syrian designers are making headway on the international fashion runway, they still struggle to find retail space in the country’s high-street shopping markets or attract the backing of local garment manufacturers.

Since ESMOD Syria, the only fashion school in Syria, was first set up in 1995 almost 300 Syrian designers have passed through its doors. Although still new to the industry, Syrian designers have won numerous awards at international fashion events such as the UNESCO Designer Awards in 2000 and the ESMOD Fashion Festival in 2002.

Despite success abroad, Sulafa Awad, a graduate from ESMOD and designer at Anat Design and Marketing Centre, says working as a fashion designer in Syria is difficult because local clothing manufacturers and retailers show little interest in buying new and innovative designs. “They don’t think about creating their own line of clothes,” Awad said. “They copy each other and flood the market with the same products.”

Awad said the few retailers interested in manufacturing original clothing ranges opt for French and Italian patterns rather than local designs. She said despite Syria boasting a globally recongnised textile and garments manufacturing industry, local retailers and customers insist on buying imported goods because they believe foreign clothes are always better quality. “It’s sad, but people in the West appreciate the Syrian goods that Anat designs far more than Syrians themselves,” she said.

Since the ban on clothing imports was fully lifted in 2005, George Hallak, director of ESMOD Syria, said local designers have struggled to compete with foreign retail brands because they lack the capacity to market their products. Unlike Europe and the Gulf states, Syria has few sponsors prepared to plug vast amounts of money into fashion shows and advertising campaigns.

In addition, Hallak said it is difficult for local designers to compete with foreign clothing brands because Syrian magazines tend to promote Western fashion trends, encouraging their readers to idolise foreign styles rather than local designs.

All of which forces Syrian fashion designers to travel overseas to get their work noticed. “Most of our students who graduate from the institute travel to Lebanon, Europe, the Gulf and even China and Japan,” Hallak said. “This is a great loss for Syria.”

To help strengthen the local fashion industry, Nada al-Assad, the founder of ESMOD Syria, is working to establish a Syrian fashion designer’s union. She hopes the union will be able to provide more support to Syrian designers in terms of sponsorship and advertising so they can compete fairly against foreign brands. She is also trying to protect traditional weaving techniques such as Syrian brocade and natural silk from dying out by encouraging local fashion designers to use these unique materials in their clothing ranges. Despite their long history in the country’s textile industry, the production of these handmade fabrics is declining. “Few people know that world famous designers use textiles from Syria,” Hallak said. “These textiles need to be protected.”

Despite the challenges facing Syrian designers trying to break into the fashion industry, many are optimistic about the future. Hallak maintains the fashion industry has come a long way since ESMOD Syria first opened in 1995. Back then the institute had difficulties just trying to find professional models. Students either had to ask friends to hit the runway or else models were bought over from Beirut. Today, Syria boasts a few modelling agencies and professional models, all of whom – including the famous Syrian model Giny Esper – were trained on the catwalk by ESMOD Syria.

Manal Yazigi, a designer who won first prize at the ESMOD Syria 2008 fashion show, said whilst she plans to travel abroad to study, she will return to Syria to open up her own atelier. “Travelling is important to get more ideas and broaden your horizons,” she said. “But I come from Syria and I will return here.”

A report on how one woman’s love for fashion has brought hope to many.

For Heike Weber, the delicate and colorful stitching of traditional Levantine clothing was love at first sight. “I feel that the embroideries represent a letter from the past that I was eager to read,” says Heike, a German national fascinated with the individual story behind each article of traditional clothing.

Heike wanted to find a clothing business that fuses traditional Levantine styles and embroideries with contemporary fashions.   So in 1988 she founded Anat, which does just that.  But what she didn’t expect was the impact that Anat has had on the lives of many low-income families.

Under the financial auspices of Anat, Heike has created several programs to teach poor and uneducated women in the region the basics of traditional embroidery, giving them the means to develop their creativity while also offering them a steady flow of income. Beginning with just 20 employees,  Anat now employs well over 600.

Heike goes to remote Syrian villages like Jabal al Hoss, located north of Aleppo, teaching residents the secrets of traditional embroidery and giving them a chance to work on her trendy clothes, bags and shoes.   Then she sells the works that they help make.  Some of the works from Jabal Al Hoss, a village known for its poverty, were so special to Heike that she displayed them as art. They were showcased at the German cultural center and in “Ruaa”, a new art gallery in Jaramana. “What struck me most about their works were the vivid colors they used,” Heike says, “even though they live in a very harsh and colorless environment.” 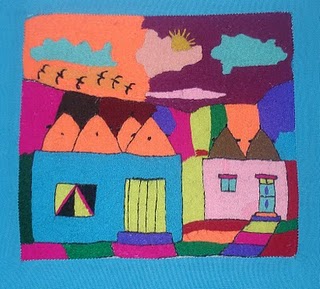 Anat has also gone out of its way to help refugee children.   In 1994, Heike entered a partnership with a school in Norway, in which Norwegian students learning about the history of Palestine spent 10 full days with refugees, learning about their lives, living conditions and heritage, as well as donating money and gifts.   By the end of the program, firm bonds had developed.  “The Palestinian children really liked the Norwegian students a lot,” Heike says. “They felt they had friends to wait for every year.”

With these successes, Heike has taken Anat international. As a volunteer with the United Nations Relief and Works Agency (UNRWA), she gave workshops for Palestinians in the Gaza Strip, which resulted in a fashion show in 1995.  With the help of GTZ, a German -owned company, Anat developed a handicrafts project in Jordan  in 2001. She visited several villages around the country and taught women to make handicrafts, which they then sold to make a living.  The results have had a lasting impact, she believes.  “Some of my students have continued the work after I left Jordan,” she says. “They are even giving courses to help other villagers.”

Heike has also held her own fashion shows in Europe, America, the Far East and the Arab world.  Tourists coming to Syria love stopping by Anat’s store which opened in 2006 near Bab Sharki. Her clothes have even attracted the eye of celebrities: word on the street has it that Asmaa-Al Assad, President Bashar Assad’s wife, has taken a liking to the organization’s fashions. 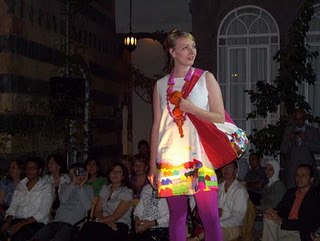 Despite the accomplishments, Heike has also encountered suspicion among locals.   Some have criticized her efforts to modernize traditional Levantine fashions and said that it distorts their heritage.  But she begs to differ. “I didn’t fundamentally change the traditional clothes,” she explains. “instead I adjusted them in a way that suits our daily lives and attracts young people.”

Regardless of these complaints, the project has been a tremendous success. As a result of Anat’s work in Jabal Al Hoss, for example, residents there were able to make a library with donated books. “The books give these people an opportunity to continue learning after they have finished school,” says Heike , adding that they wouldn’t have had such an opportunity otherwise. The tiny village is also currently collecting money to buy a bus to take the village’s children to their school, which is a long and uncomfortable walk from the village.

In the future, Heike hopes to expand the reach of Anat’s fashions as well as the philanthropic services associated with the business. “I hope to widen the range of our work and to give our knowledge to as many as we can,” she says with a smile. ” I hope that Syrian handicrafts in general become an international trademark that people are proud to wear”

This article was published in Syria Today magazine. Issue no. 26