Residents of Old Damascus are sceptical that a parking ban will be issued, let alone enforced. 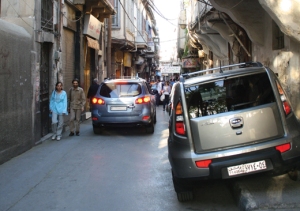 Walking around Old Damascus can be an overwhelming experience. Children on bikes race through the narrow alleyways as drivers honk their car horns, forcing pedestrians to squeeze to the sides so they can pass.

Down one such alley, in the first turn to the right, is a narrow passageway. There on one recent afternoon, two cars were jammed beside each other, blocking the entrance to a house. Local residents and passing tourists gathered in a group to offer their advice to the drivers on how to escape while an obviously irate woman confined to her home could be heard screaming curses at the drivers who are “poisoning” her life.

Since early 2009, the Syrian press has occasionally published reports about a parking ban in Old Damascus that would go into effect “next month”. Two years later, government officials began saying that in a “matter of weeks” cars would be banned from entering the old city. Then they said the ban was postponed until the governorate could provide parking lots around Old Damascus, environmentally-friendly, light-weight delivery vehicles and electric cars for shop owners’ and residents’ use.

However, when Syria Today met Abdullah Aboud, the director of traffic and transport for Damascus, in mid-May, he said the parking ban was suspended because of the political unrest that began in mid-March.

“The plan should have been opened for investment by now but this had to be delayed because of the current circumstances,” Aboud said.”We are in the final stages of the master plan.”

Grand plans
According to statistics from the Damascus local authority, the overall car-carrying capacity of the old city is 345 cars. The average number of cars parked there, however, is on average 1,071 cars at any one time, more than three times what the area can theoretically accommodate.

According to unconfirmed figures published in the Syrian media, approximately 27,000 cars enter the old city every day. The large number of cars in the old city causes congestion and pollution and speeds up the dilapidation of old historical buildings, according to experts at Friends of Damascus, a Syrian cultural society which aims to protect the city’s heritage.

According to the plan, only residents of the old city will be allowed to drive inside it and this would be enforced via a permit system, Aboud said. The governorate would divide the old city into seven zones and would only allow residents to park in the zone where they live. Public transportation inside the old city will consist of 75 electric cars with the capacity to seat four and another 20 with a seating capacity of 12.

“These would include a few VIP vehicles for formal delegations,” Aboud added.

A number of lightweight delivery vehicles would also be allowed into the old city for a few hours a week to transfer goods to local shops.

The governorate would also provide visitors with five parking lots outside the old city walls in Sofamiyeh, Bab Touma, Dar es-Salam, Hariqeh and on Amin Street, and the lots would accommodate 800 cars in total. Bus routes would also circumnavigate the walls. In the future, Aboud said he hopes the buses will be replaced by a tramway.

Too good to be true
Old city shop owners and residents alike said they are looking forward to the ban. Mohammad Younes, a young carpet seller, expects it to boost his business.

“Cars are a big ‘fun spoiler’ for tourists. They make the old city polluted, noisy and hard to walk around,” he said. “A parking ban would attract more tourists and shoppers.”

Rasha Mohammad, who has been living in Old Damascus for the last 20 years, said the car ban would provide her with more space to park.

“I have to fight with neighbours and the owner of the nearby restaurant over a parking space for my car. Sometimes, I am forced to park my car in a narrow alley and risk it being scratched by other cars that pass by,” Mohammad said. “Dividing the old city into exclusive parking zones for residents would provide a safe parking place for my car.”

Mohammad, however, said she worries that the governorate’s traffic plan is too good to be true.

“The governorate has been promising to introduce a car ban for ages and nothing has happened,” she said. “Even if they do issue a car ban, what guarantees that it will be implemented on the ground and won’t be ignored just like the smoking ban was ignored before it?”